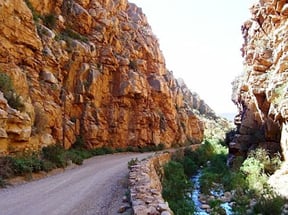 Climbing 1000 metres in 12 kilometres, the Swartberg Pass is one of the steepest passes in South Africa.

Running between Prince Albert in the north and Oudtshoorn in the south, the route offers spectacular views over the Little and Great Karoo.

The road is not tarred and can be tricky in wet weather but you certainly don’t need a big 4x4 for the pass.

Along with striking warped and twisted rock formations and interesting plant life, you will see some amazing drystone work supporting the picturesque hairpin bends.

Master pass engineer Thomas Baines and his team of convict labourers took five years to build it in the late 1800s. Today it is a National Monument and largely unchanged.

Reviews:
14 Reviews
Things to do in Prince Albert

★★★★★ 6 Reviews
Sleeps 86 in 20 rooms
Prince Albert Self-catering, Camping and Caravanning
Oudekloof Guest House is situated in the Prince Albert Game Park. The homestead is surrounded by apricot and plum trees, and it lies just 6...
R320
Avg per night for 2 guests
View Deal

Sleeps 2 in 1 room
Prince Albert Self-catering
Olive Pip Rustic Luxe Studio is on the grounds of Olive Grove House and Olive Grove Luxury Rustic Cottage. It is a one-bedroom and one...
R850
Avg per night
View Deal

Sleeps 16 in 6 rooms
Prince Albert Self-catering
Yellow House is situated on the edge of the beautiful and quaint Karoo town, Prince Albert. The property is one of the historical...
R810
Avg per night for 2 guests
View Deal

Sleeps 12 in 5 rooms
Prince Albert Bed and Breakfast, Hotel
A warm welcome from the Great Karoo. The Sanctuary is a luxury boutique hotel in Prince Albert, on the edge of the Great Karoo, Western...
R1800
Avg per night for 2 guests
View Deal
20% OFF

Click to display the map
Swartberg Pass is 20.3km from the centre of Prince Albert , the nearest airport 74.9km (George Airport).
*Distances are shown as the crow flies and not necessarily the actual travelling

Other things to do near Prince Albert

★★★★★ 1 Review
Popular Attraction in Oudtshoorn
These tours that commence only at sunrise are dependent on fair weather, since these little...

★★★★★ 2 Reviews
Waterfall in Oudtshoorn
Rust en Vrede is a lovely little waterfall that runs 365 days a year – even though it is found in...

★★★★★ 11 Reviews
Popular Attraction in Oudtshoorn
Visit a sparkling ancient African cave system in the Karoo. One of the major attractions in the...
See all things to do near Prince Albert
powered by